Over at the OKFN blog, Rufus Pollock expounds on a theme close to my heart: Open Data is a Means not an End. If I’d finished this abecedary last year, that would have been my ‘T’ — “Transparency Is Not Enough”. But I’ve jiggled things around a little, and so it fits better here, because my answer to Rufus’ question of what the real goal is, is to Make Someone Squirm.

Transparency (of which Open Data is only a small part1), is, on its own, fairly meaningless. The value comes from using it to increase accountability. Usually, that involves doing some digging. Occasionally there is information so explosive that the main fight will be in obtaining it in the first place, but much more often our job is to uncover what’s hidden in plain sight. There is often a very significant gulf between information being available and it being understandable. Public Whip was born because Julian Todd found it interminably difficult to answer the simple question of how his MP voted in the Iraq War debate — even though theoretically all this information was already publicly available. Julian and Francis did a great job of making that information much more accessible, and it’s great to see that being replicated now in many other countries.

But often people don’t go far enough when they expose information like this. Giant tables of voting records, for example, are largely only useful to journalists, activists, or people who are already politically engaged. Most people don’t know, don’t wan’t to know, and shouldn’t need to know what a division is, or intricate nuances of Parliamentary theory. What the average citizen cares about is simply whether or not they agree with how a politician or political party (particularly one supposedly representing them!) votes or acts: 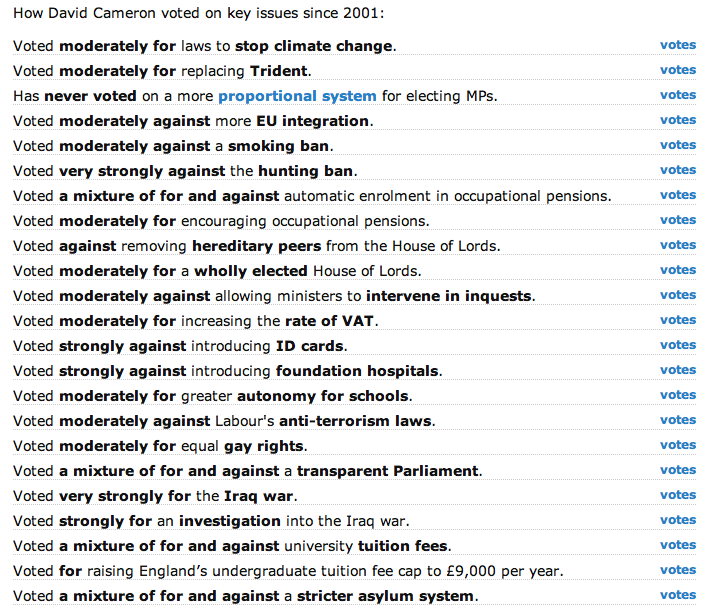 Distilling a vast amount of raw data into something like this is hard work — but it’s important, and even essential, work. This makes MPs squirm. This cuts through their spin, and PR, and propaganda and exposes, in clear, accessible, everyday language, what they actually do in your name.

Schooloscope (Go study it now before it closes down!) did a wonderful job of making school information beautifully accessible to parents who have little desire or inclination to wade through dense and dull OFSTED reports and DCSF tables. Your job is go do likewise with lots of other data. Please let me know how you get on.

This entry was posted in Abecedary. Bookmark the permalink.